Officials say another fire burned at the same site 32 years ago, prompting more worry from residents who remember that blaze

Families who live near the site of a large fire burning at a plastic manufacturing facility in Grand Prairie Wednesday were concerned about flames and potentially toxic smoke blowing into their neighborhood.

No injuries have been reported and no evacuations have been ordered but the fire still presented a threat to those living in and around the area.

Davey lives in a neighborhood north of the plastics plant and watched large plumes of smoke from the fire with concern.

"You've got COVID-19 and now you have the fire. All those chemicals are floating right over this neighborhood," said Davey.

Environmental groups raised alarms that the public does not know what chemicals were in the huge plumes of smoke.

"The main concern right now is what's in the air?" asked Corey Troiani with the Texas Campaign for the Environment. "What happens when you burn tons of plastic off right next to a community?"

The Texas Commission on Environmental Quality said they are providing air monitoring for volatile organic compounds and particulate matter.

The EPA tells NBC 5 in an email that it has deployed its ASPECT plane, Airborne Spectral Photometric Environmental Collection Technology. The EPA said it has airborne chemical detection capabilities to assist with air monitoring.

For hours on Tuesday, NBC 5 crews covered the blaze from the vantage point of a neighborhood on the north side of the fire.

Tyre Park, which is located just several hundred yards away from the facility, seemed to be the gathering grounds for dozens of people – both near and far – to watch the fire and take pictures.

Heather Dossey was one of them. She lives in nearby Arlington in the path of the smoke and was concerned for her neighborhood.

“You can see it everywhere,” she said. “This is literally right behind my apartments. It’s one of those things where I fear for my safety.”

Barrett Craig stopped by the park to watch the flames. He also happens to be one of the 2,000 employees of Poly-America.

“I’ve been there for 11 years and I’ve never actually seen any type of fire to this magnitude,” he said.

He lives 20 miles from work in southern Fort Worth but the smoke managed to reach his doorstep.

"I thought it was rainclouds at first. I knew there was a fire but I didn’t think the smoke would make it that far,” he said.

Firefighters said most of what burned is plastic material that is being stored on the site, but there’s a lot of it.

According to the company’s website, it’s the world's largest producer of a specific type of plastic used in construction. It also manufactures trash bags.

Officials stressed that the main factory was never in danger of catching fire because the closest building was several hundred feet away from any flames. The flames in the closest part of the fire to the building died down at about 10 a.m.

"Had the fire actually have made it inside, there's so many safety procedures inside that building. They would've been able to pump just so much water instantly. I was confident that there's no way that fire could've spread on the inside as long as the safety mechanisms are all in place,” Craig said. 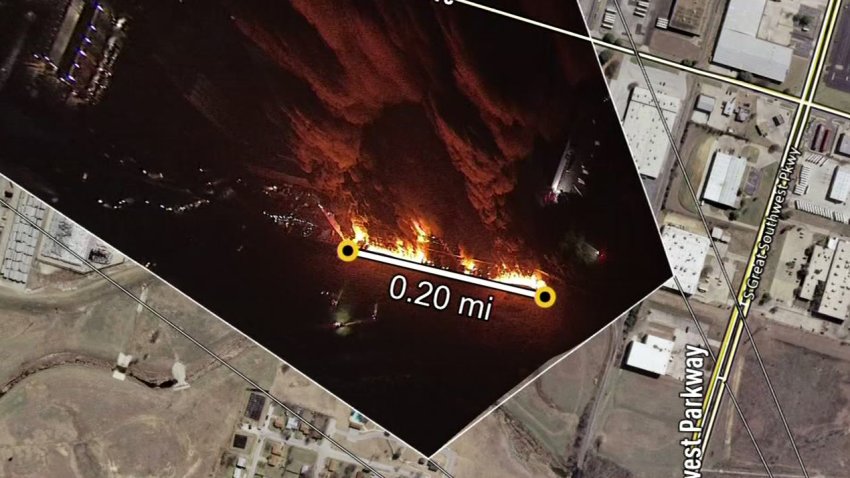 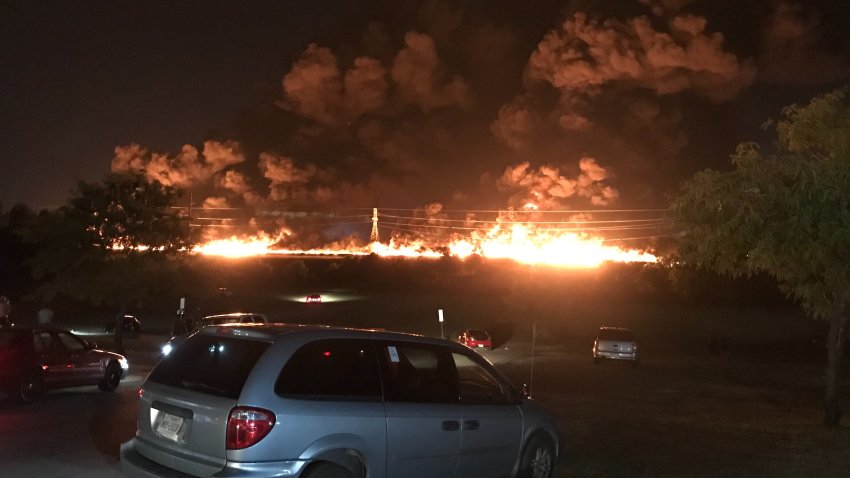 Fire officials said 60 mph winds from Sunday night's cold front possibly damaged the electricity wires that fell and sparked the fire, though that has not yet been officially determined.

Ironically, this isn't the first massive fire to happen there.

“I was on that one as well,” he recalled. “Same exact scenario, I don’t know what started it that night. We had bad storms as well.”

Bill Murphy, assistant chief of operations with the Grand Prairie Fire Department, gives an update on the massive fire at Poly-America, a plastics manufacturer. Murphy said the fire is expected to burn for several days and that the smoke is toxic and could be an irritant to those with respiratory issues. This news conference was held at about 8:15 a.m. Wednesday.

That’s why seeing the smoke is traumatizing for neighbors like Maccabees Yahsharalah, who has lived in the neighborhood nearby for 50 years. He remembers the older fire.

"We used to wake up in the morning and we couldn't see the sun. And we would think, what's going on? It would be dark here,” he said. “It had burned about three or four days, we would have smoke over us for all that time."

“Even though the flames are lower, once it burns down to where it is manageable, we’re going to have to go in with front loaders and once we break up the debris, all that plastic underneath is burning. We’re going to have wet it down with foam. We’re talking 300 yards worth,” said Murphy.