Justin Frazell, a longtime award-winning North Texas country music DJ, has been fired from 95.9 The Ranch after being accused of sexually assaulting his daughter's friend during a sleepover on New Year's Eve.

According to an arrest warrant affidavit issued last week and obtained by NBC 5 on Monday, Frazell allegedly made unwanted, non-consensual sexual contact with a girl who was at his family's Mansfield home for a party on Dec. 31, 2020.

At about 2 a.m., a couple left the party and their daughter, who was friend's with Frazell's teenage daughter, stayed behind to spend the night. 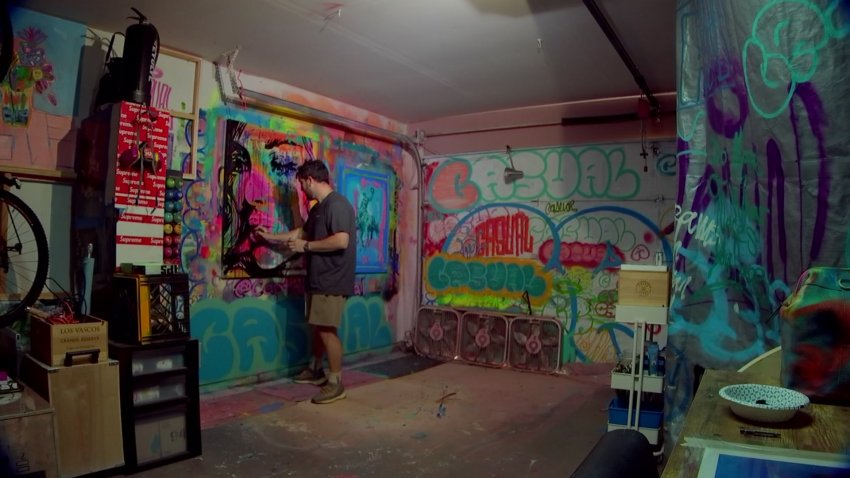 In the affidavit, the victim told Mansfield police her friend had a headache and went to sleep in her parent's bed. The victim said she went to her friend's room and spent the next couple of hours on a FaceTime call with a friend. The victim told police that at some point her friend's father, identified as Justin Frazell, entered the room and brought her a White Claw -- an alcoholic seltzer drink -- kissed her on the forehead and said, "This is between us. Don't say I never do anything for you."

According to the affidavit, the friend the victim was speaking with on the phone saw the kiss and witnessed Frazell give her a drink. The friend corroborated the story to the police and said Frazell told him over the video call that she, "was a good girl and that he needs to make sure he does not hurt her" before he left the room.

The victim told police she and Frazell's daughter had four to five drinks over the course of several hours that night, with their parent's consent, and that she drank about a quarter of the last drink Frazell allegedly brought her before she got tired and hung up the phone to go to sleep.

According to the statement in the affidavit, the victim "was asleep when the blankets were suddenly pulled off of her" and that "her pants and underwear were pulled off and her legs were pulled down toward the bed."

The victim told investigators she was too scared to say anything or open her eyes and that she then felt someone touching her genitals with their hands and mouth before backing away from the bed. She told police she could hear the person moving around the room and that he then returned naked and got on top of her and began moving around.

A noise in the hallway apparently spooked the man, the victim said in the affidavit, and that he then got up and put on his pants and opened the door. That's when the victims said she saw Frazell standing in the doorway wearing a shirt he was wearing earlier in the evening that had a salsa stain on the front. She said Frazell opened the bedroom door and talked to a child in the hallway -- a boy who was spending the night with his son. The victim said Frazell told the child that he was just checking on the girl and then he walked back to her and pulled her pants halfway back up. The victim told police Frazell walked away again only to return and pull her pants all the way up before leaving the room and not returning.

At 4:57 a.m., the victim said she began calling her parents, sister and grandmother to come to pick her up but that no one answered. She said she was about to call 911 when her grandmother called back and agreed to give her a ride home.

According to the affidavit, as the victim waited on her grandmother, someone apparently heard her crying. Frazell came back into the room and asked her if she was OK and she told him to leave her alone while crawling away from him. The victim said he entered and left the room several times before suggesting he wake his wife and daughter to see if she was OK.

The victim said when Frazell's wife entered the room she jumped into her arms and began crying harder. She said she told the woman someone touched her inappropriately but, because Frazell was in the room, she told police she didn't say who.

The victim went to John Peter Smith Hospital in Fort Worth and a sexual assault exam was performed. The Sexual Assault Nurse Examiner's report indicated no trauma but noted that specimens were taken by the SANE nurse. Those specimens were sent to the Tarrant County Medical Examiner's Office for analysis. According to the affidavit, on March 18, 2021, investigators received lab reports back from the ME's office that confirmed the presence of male DNA samples collected from the victim's vaginal area.

An arrest warrant was issued on March 23 alleging Frazell committed 2nd-degree felony sexual assault by knowingly and intentionally putting his mouth on the victim's genitals without her consent. Frazell was arrested and booked into the Tarrant County Jail. As of this writing, he has bonded out but it's not clear how much bond was required.

According to a cached version of his professional biography on 959theranch.com, Frazell began his radio career in 2000 and has hosted the morning show at KFWR-FM, 95.9 The Ranch, since 2009. A nominee for entry into the Texas Radio Hall of Fame, Frazell has also hosted a popular show on Sundays, the award-winning Texas Red Dirt Roads Radio Show. Before working at KFWR, he also worked at 570 KLIF-AM and KPLX-FM, 99.5 The Wolf.

After learning of Frazell's arrest, his photo was removed from the listing of on-air talent on the The Ranch's station's website and his bio was replaced with only the following statement: "Based on additional information that has come to our attention, 95.9 The Ranch has terminated its relationship with Justin Frazell, effective immediately."

Frazell and his wife have two-children, both of whom were born premature. The couple is credited with raising more than $2 million for Cook Children's Medical Center's NICU unit through two charitable events.

It's not clear if Frazell has obtained an attorney and he's not issued any public response to the allegations.