Johnny Football is heading to the NFL.

Texas A&M quarterback Johnny Manziel declared for the NFL draft on Wednesday following two spectacular seasons in which he became the first freshman to win the Heisman Trophy and helped the Aggies make a splash in their first two years in the Southeastern Conference.

"After long discussions with my family, friends, teammates, and coaches, I have decided to make myself available for the 2014 NFL draft," Manziel said in a letter posted online by the university. "The decision was not an easy one, but we all felt this was the right time to make the next step toward a professional career."

Some NFL draft analysts have Manziel ranked as high as the third overall pick in mock drafts.

In a style befitting his record-setting career, Manziel led the Aggies to a 52-48 come-from-behind win over Duke in the Chick-Fil-A Bowl on New Year's Eve in his final college game. Texas A&M trailed 38-17 at halftime before Manziel guided them to the victory by finishing with 382 yards passing with four TD tosses and 73 yards rushing and another score.

"In all of my years of coaching, Johnny Manziel is the most exciting football player I have ever seen," A&M coach Kevin Sumlin said. "We appreciate everything he has done for Texas A&M and Aggie football and wish him nothing but the best."

Manziel became the first freshman to win the Heisman in 2012 after setting numerous school and SEC records while leading Texas A&M to an 11-2 record and a victory over No. 1 Alabama in its first season in the SEC. 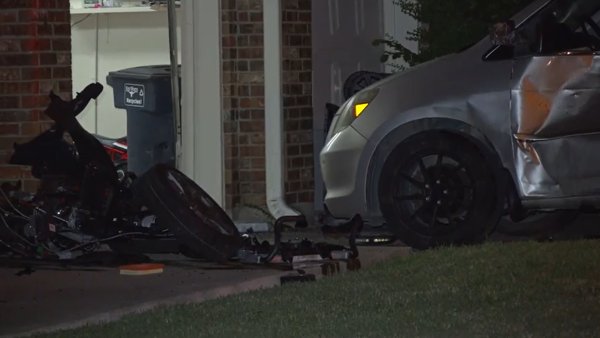 Woman in Critical Condition After Motorcycle Crashes into Fort Worth Home: Police

His dynamic play created a frenzy and pushed him into a stratosphere of celebrity that few college athletes have reached. That began to cause problems since Manziel, who is from Kerrville, Texas, still had three years of eligibility remaining.

He followed his Heisman-winning season with a high-profile offseason of road trips to Las Vegas and the NBA Finals. Manziel met Heat star LeBron James and rapper Drake, and he posted some tweets that made headlines. One that brought the ire of Aggie fans was when he said he "couldn't wait" to get out of College Station.

His most embarrassing blunder came during the summer when he departed early from a quarterback camp for high school players run by the Manning family in Louisiana. Manziel said it was a mutual decision after he overslept and missed meetings and activities.

Manziel's trouble continued when he got back to football. He was suspended for the first half of the Aggies' season opener against Rice for what the school said was an "inadvertent" violation of NCAA rules. He was investigated for allegedly accepting money for autographs from memorabilia brokers, a violation of NCAA rules that could have led to a much longer suspension.

The Aggies were supposed to contend for a national title in Manziel's encore. But another standout season by the dynamic quarterback wasn't enough to overcome a porous defense that was among the worst in the nation. Texas A&M finished 9-4.

Manziel shook off his early season drama to lead the SEC with 4,114 yards and 37 touchdowns and he topped the team in rushing with 759 yards and nine more scores. He threw more touchdown passes, had more yards passing, a better completion percentage and averaged more yards an attempt than he did in 2012.

Manziel was again a finalist for the Heisman in 2013, but Jameis Winston stole his thunder with a season much like Manziel's a year before to take home the award to Florida State. Manziel finished fifth.

"Would love to see Johnny Manziel in a Vikings uniform. This guy is the real deal. He will be a big time player on Sundays," Tarkenton tweeted.

The Vikings have the eighth overall pick in the draft.

The Houston Texans, who play about 100 miles from College Station, have the No. 1 pick in the draft and need a quarterback, though most mock drafts have Louisville's Teddy Bridgewater going No. 1.

Houston Rockets forward Chandler Parsons tweeted good luck to Manziel in the draft Wednesday and finished the tweet with: "Texans??"