Inside the Massive Restoration of the Historic Baker Hotel

Yes, it is happening.

Work is well underway to revive the 'Grand Old Lady' of Mineral Wells.

This June will mark two years since a massive restoration project began to bring the neglected Baker Hotel back to life.

Originally opened in 1929 by T.B. Baker for a reported $1.2 million, it was the first air-conditioned hotel in Texas and boasted an Olympic-sized swimming pool and spa attracting thousands to enjoy the healing waters of Mineral Wells.

But after closing its doors in 1972, the hotel began a slow decline until 2019 when a group of investors partnered with the city to buy the property and restore the famed hotel.

Since then eager residents and people passing through have watched the transformation unfold from the street.

Photos: Inside the Baker Hotel Renovation

While the credit for saving the historic hotel belongs to the town – community members and investors – who refused to give up on their dream to restore it, Rawlings is tasked with bringing the Baker Hotel back to life.

It’s believed to be the largest private restoration project in Texas history.

“I’m just in love with it,” said Rawlings. “It’s a long-time coming and I’m glad to be moving along with it.”

Rawlings has been involved in other high-profile restoration hotel projects, including Austin's Driskell Hotel and the St. Anthony in San Antonio, but says the Baker Hotel is his favorite.

“It’s amazing the amount of craftsmanship,” Rawlings said. “The place was done over the top for its day and they had some great craftsman so we’re honored to be carrying on the tradition and bringing things back and there was so much good stuff that was just buried.

Their work is most visible from the street and high above town.

Mark Rawlings, restoration project manager and general partner of The Baker Hotel and Spa talks about the unusual things workers have found in the walls during renovation.

All of the original 997 windows have been restored -- a process that was done entirely on-site and took nearly a year to do.

The most dramatic transformation to date may be the famed ‘Cloud Room’. The ballroom on the 12th floor was once covered in debris, graffiti and had been partly covered up by renovations done decades earlier.

Crews demolished anything not original to the hotel with the plan for public spaces to look just like they did when the Baker Hotel opened in 1929. 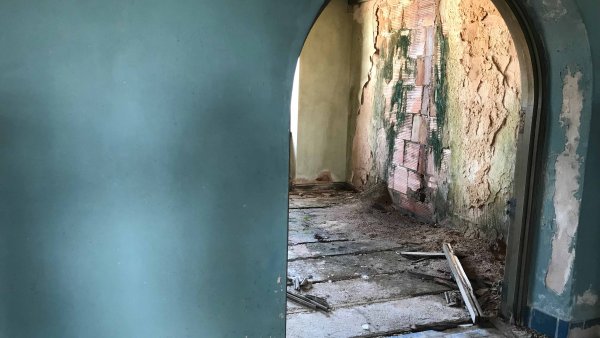 The Legend of Bonnie and Clyde at The Baker 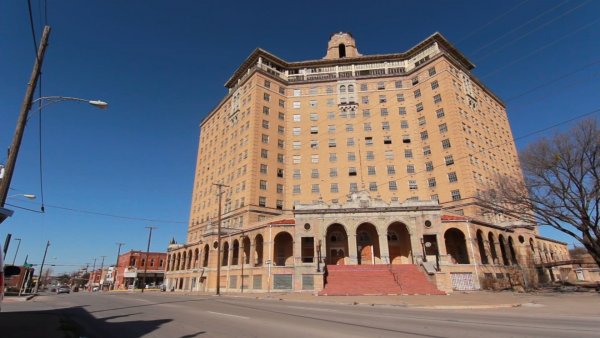 Rawlings is most excited to share details about what’s been dubbed the ‘treasure room’.

It’s where every item from the original chandeliers to moldings and doors are being preserved.

Rawlings said it is only now that the debris and muck has been removed that he and his team can start examining the architecture and symbolism behind the original details in the molding and walls.

“It’s making sure that we harvest everything, save everything and we’ve got rooms full of door hinges to old lavatories to light fixtures and we save all of it. It doesn’t deserve to go the dump,” Rawlings said.

The plan is to restore as many of the items as possible to put back in the hotel. What cannot be used will be sold, so the public can own a piece of the Baker Hotel. Money raised will go back into the project, said Rawlings.

Once completed a museum inside the hotel will display items uncovered during restoration along with the story of the Baker’s past.

People are invited to be a part of the restoration project by following the Baker Hotel & Spa on Facebook and Instagram and are invited to share old photos or stories they have of the hotel and even items that once belonged to the hotel.

One family donated back the original shoeshine stand they’d purchased during an auction years ago. It stood in the lobby when the hotel first opened.

Relatives of the original owner T.B. Baker also donated pieces of china that were once used in the hotel.

Rawlings said they are waiting on the final design plans to get started on guest rooms and public areas.

14 guest suites will stay their historic size, but the remaining guest rooms will be expanded to accommodating for modern living.

The restoration also includes the spa and the Olympic-size swimming pool.

Originally expected to open in the fall of 2022, Rawlings said he is now planning for an opening in 2024. Like many hospitality projects, the pandemic has caused delays.

“We didn’t have the effect that a lot of places have in that we were able to work straight through,” said Rawlings. “However, material pricing is crazy right now and we’re waiting and hoping that it stabilizes soon.”

Rawlings said he is most excited about opening the doors so everyone can enjoy what he enjoys every day.

“That’s the goal. We want to get it open and get everybody to come and enjoy it like we are.”