The ex-boyfriend of one of the two sisters shot and killed inside a East Texas university residence hall Monday has been arrested and is expected to be charged with capital murder, police say.

Texas A&M University-Commerce police said 21-year-old Jacques Dshawn Smith is in custody and is believed to have fatally shot his ex-girlfriend, 20-year-old Abbaney Matts, her 2-year-old son and her 19-year-old sister, freshman Deja Matts, inside the Pride Rock residence hall where Deja lived.

University police confirmed the arrest on Twitter Tuesday afternoon, saying witness tips and surveillance video led to the development of Smith as a suspect.

Rowlett SWAT, along with the Texas DPS and Texas Rangers, executed search and arrest warrants at Smith's Rowlett home on Luna Road and took him into custody Tuesday afternoon at a home in Rowlett.

NBC 5 has learned Smith was free on bond related to an alleged assault family violence incident that took place last week. The report was filed by Abbaney Matts, one of the shooting victims.

According to Garland police, Abbaney said Smith assaulted her Jan. 27 at a home on Bosque Drive with a frying pan, lamp and then pulled out a knife before leaving the residence. Though she was not hospitalized, Abbaney reported injuries to the right side of her head, her eyes and had red marks and abrasions after the alleged attack.

Smith was arrested and an emergency protective order was issued on Abbaney's behalf. Smith was freed Jan. 29 after posting $15,000 bond.

NBC 5 has also learned Smith has a string of priors dating back four years with charges including evading arrest, theft and aggravated robbery.

Family members told NBC 5 Abbaney took her 2-year-old son when she drove Deja back to her dorm room Sunday. It was late, so they stayed the night. Tuesday, family members questioned how Smith, who is not a student, gained access to the dorm.

The child, who was grazed in the foot by a bullet during the shooting, was treated and released to the custody of family members. A GoFundMe page has been set up by the family to help cover funeral expenses for the sisters.

The school confirmed Tuesday that Deja was a freshman at the university and was pursuing a Bachelor of Science in Public Health. Neither her sister, Abbaney, or Smith, were enrolled at the school.

According to university police, "the shooting appears to be a targeted, isolated event," though investigators have not yet revealed a motive in the shooting.

"Our continued thoughts and prayers go to the family and friends of the victims from this week’s tragedy," the school said in a news release.

All classes, programs, and events on campus were canceled for Tuesday and Wednesday. Classes are expected to resume Thursday.

Counselors are available in the Halladay Student Services building on campus or by calling 903-886-5145 for anyone who needs assistance.

Two women are dead and a toddler was wounded in a shooting Monday morning inside a residence hall at Texas A&M University-Commerce, university police say.

Texas A&M-Commerce University Police Chief Bryan Vaughn said Monday that a student at the Pride Rock residence hall called university police at about 10:17 a.m. though he didn't elaborate on what was reported. Vaughn said officers arrived at the coed freshman dorm and found the bodies of two women and an injured 2-year-old child inside one of the rooms.

NBC 5 reviewed the 911 call on Tuesday and learned a woman called police to report something had gone through her wall. She said she arrived back at her dorm room to find part of the ceiling on her bed, a hole in her wall and a nick on the calendar opposite the hole. She reported that it appeared something had been shot through her wall.

Pride Rock residence hall, which was closed throughout much of the day Monday while the shooting was investigated, was reopened to students at about 10:15 p.m. Monday night.

Last October, two people were killed and a dozen others injured in an off-campus shooting at a homecoming and Halloween party involving Texas A&M-Commerce students. The gunman in that shooting has never been found; a man identified as a suspect early on was later cleared of any wrongdoing. 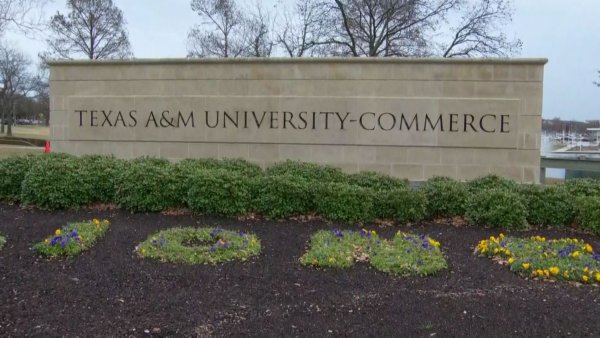