Injured firefighter will be at the rehab facility for the next two weeks, wife says

A second Dallas firefighter injured in last month's apartment explosion has been released from the hospital.

NBC 5 spoke to Mona Hall on Thursday, the wife of Dallas Fire-Rescue Engineer Ronald Hall who was injured last month in an explosion.

Hall, who became a firefighter at age 18 and was set to retire in January, will be at the rehab facility for the next two weeks, Mona said.

Hall opened up about what he remembered from that day.

“I had a huge black scar around my side, where the explosion basically tried to rip me in half. And these are things that I felt instantly when the explosion went off. You feel all the debris around you flying everywhere you see your captain flying in the air, you see your rookie flying in the air. And I guess the reason why I didn't fly is because the brick and rubble that blew out on my leg trapped me,” Hall said..

He says he called his wife Mona so she could drive to meet him one last time.

“And tell her to get to Dallas because that's probably the last time we're going to be able to see each other,” Hall shared.

“I was not, I was not near prepared for what I saw. He was not recognizable. But he was talking, and he knew I was there,” Mona Hall said.

Hall’s leg is broken and he's battling an infection. He said he was relieved when doctors said burns covered roughly 40% of his body.

“I could survive and that was my hope right there, he gave to me that hope,” he said.

Thursday, they celebrated the moment he was transferred from Parkland's burn unit to rehab, surrounded by the brotherhood. They expect the road ahead will be challenging and say there is still a lot of uncertainty about his health.

“My life's not going to be the same as it was,” hall said.

“His range of motion, his feeling, full use of the leg is still very undetermined,” said Mona Hall.

But they're taking it one day at a time. Looking forward to going home-

“I'm just happy he's alive. It's turned everything upside down, our living situation our retirement plans, but we'll make it through it together,” said Mona Hall.

In all, four firefighters from Fire Station 25 were hurt on Sept. 29 while investigating a gas leak at the Highland Hills Apartments in southeastern Dallas.

As the firefighters looked for the source of the leak, an explosion occurred that partially collapsed part of one of the two-story apartment buildings and injured four residents and four firefighters.

Firefighters Hall, along with Capt. Christopher Gadomski, and Officers Pauline Perez and Andrew Curtis, were all hurt in the blast. Curtis suffered a foot injury and was discharged the same day while the other three were hospitalized and treated for burns and other critical injuries. Perez, who joined the fire department in July 2019, was discharged from Parkland Oct. 15 after spending more than two weeks in the hospital's burn unit. As of this writing, Gadomski remains hospitalized.

Man Arrested, Charged in Connection With Apartment Explosion That Injured 8 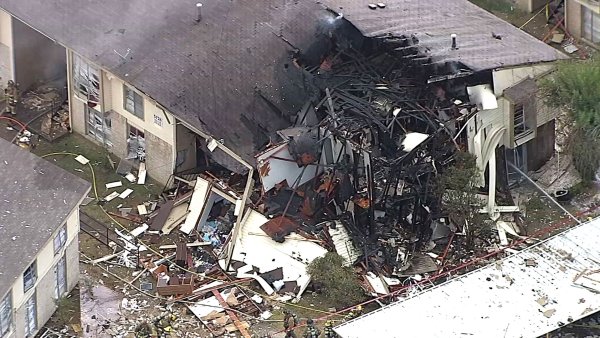 Dr. Marshal Isaacs, Medical Director for Dallas Fire-Rescue, said Oct. 14 that the injured firefighters have "long roads of recovery ahead of them.”

A GoFundMe established for the firefighters said they will likely experience unforeseen medical expenses for the rest of their lives.

Dallas police arrested Phillip Dankins this week and charged him with deadly conduct after they say he fired a gun into a vacant apartment, severing a natural gas line that was attached to a stove and that the gas leak led to the explosion.