Both of the top leaders in Dallas government spoke with NBC 5 Tuesday about the 11-point police reform plan from City Manager T.C. Broadnax and about calls from demonstrators for ‘defunding’ police.

Broadnax often lets the elected officials do the talking at City Hall. But in the wake of demonstrations and a tense exchange between Broadnax and Johnson at a meeting Friday, both leaders agreed to interviews.

In social media posts Tuesday evening, City Council members said 10 of the 14 Council Members had signed a memo to Broadnax requesting a review of reallocating city resources in the next budget this fall.

In interviews Tuesday, the Mayor and City Manager pledged to consider budget changes but stopped short of endorsing "defunding" of police. 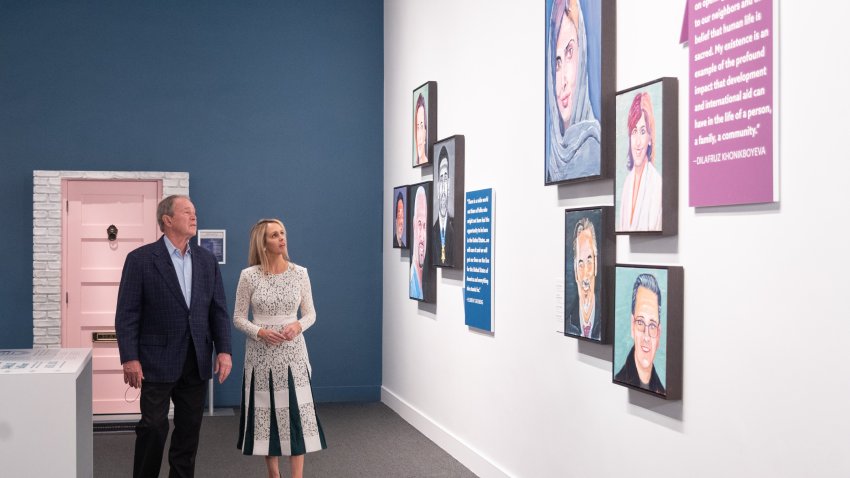 The current city budget was unanimously approved in September by all the Council Members with the existing level of police funding. At the time, the spike in violent crime had many members pushing for more police spending and more police presence in their neighborhoods.

Broadnax said the reform plan he released Friday is a combination of immediate and longer-term changes.

“It’s important for us to do as much as we can, for many things that we may not have done in the past, as quickly as possible,” he said.

A “Duty to Intervene” policy for police was already implemented last week. A “Warning Before Shooting” policy is to be added this week. Dallas officers have been reminded of a 2004 bulletin forbidding neck restraints.

Broadnax said some of his proposals would have already been heard by the Dallas Citizens Police Oversight Board. A newly hired police monitor only started working for the board in February. Board meetings were canceled due to the coronavirus pandemic. The first meeting in months was scheduled for Tuesday evening.

A 90 to 120-day proposal in the Broadnax plan is expanding the “Right Care” program, which dispatches paramedics and health experts to mental health calls for service instead of just police.

“A person showing up with a gun and the power of being a peace officer is really not what they need there. There are some other kinds of things going on that might be better suited, from a social worker or a behavioral health care worker, or someone else,” Broadnax said.

“I think it’s important that we show the public, and I think we’ve done that, that we take this seriously and we’re willing to take action and no one wants to drag their feet. But equally important to acting quickly is acting in a way that the public has participated in,” Johnson said.

Dallas Mayor Eric Johnson talks about the 11 point plan Broadnax released Friday to reform police, the demonstration on the bridge 6/1/20, talk of “defunding” police, and the Mayor’s working relationship with Broadnax after a tense meeting Friday night.

Both leaders said the city was already working on January recommendations from a task force appointed by Johnson to develop programs that would improve neighborhoods and combat crime without police.

“And that in and of itself would help alleviate some of the pressure on the police department budgetarily, and ask them to do less,” Johnson said.

The recommendations include better lighting, combating blight, working with schools and neighborhood leaders to combat violence, all of which Broadnax supports.

“We set up an entire office to help the police department in those non-policing functions that coordinate all of our services,” Broadnax said.

Amid the protests, the call for what some demonstrators call “defunding” police gained support from City Council Members.

“I think we’re getting caught in what those words mean to different people,” Broadnax said.

The manager and the Mayor said Dallas could use more spending on these and other programs to improve neighborhoods, but not by eliminating police.

“If it means getting rid of the Dallas Police Department, I don’t support that,” Johnson said.

The day in September when the current budget was approved, demonstrators were in the room with signs asking for a "poverty budget," that would better address social problems in the city, but the Council refused those requests.

“We’ve had a quick change in the rhetoric from some of the council in a very short time and that’s a conversation we need to have very soon,” Johnson said. “They want to know if we spend too much money on law enforcement and not enough money on other things.”

Johnson said he is still unsatisfied with answers he has received from Broadnax and Dallas Police Chief U. Renee Hall about the June 1 police response to nearly 700 demonstrators on the Margaret Hunt Hill Bridge.

“I can’t assess how good a job anyone is doing with respect to that until I have those facts,” Johnson said.

The chief has said an investigation is still underway about whether tear gas and rubber bullets were used on the peaceful crowd, as demonstrators have claimed.

Broadnax has said what happened on the bridge was unacceptable, but he strongly debated Johnson over the Mayor's strong line of questioning at the marathon meeting on the topic Friday.

In interviews Tuesday, both said they do work together, despite the way that meeting made it seem.

“I owe it to the mayor and council who hire me to give them my best,” Broadnax said. “It’s very critical, whatever people believe or think, me and the mayor, we work together. We’ve got to figure out how we get that done."

Johnson said he hopes taxpayers hear one message amid all the issues at this time.

“We are going to get through this situation with COVID-19 and with protests related to racial justice, together. We are at the point where we need to start talking with each other and come up with policy solutions that involve all of us,” Johnson said.

Regardless of calls for additional funding in some areas, much of city government could face “defunding” in the near future. The coronavirus has made the city budget ill, with a shortfall of up to $130 million forecast in the next spending plan.

“Dallas is resilient. I think we’ve got some of the best minds working on these issues,” Broadnax said.