The jet that crashed into a Lake Worth neighborhood narrowly missing a row of homes was removed Tuesday.

The pilots in the jet were forced to eject at about 10:40 a.m. for an unknown reason. The plane crashed seconds later in between a row of houses on the 4000 blocks of Tejas and Dakota trails.

Both of the pilots survived, one landing nearby in the neighborhood and the other near the main thoroughfare. One pilot suffered minor injuries but was released from the hospital on Monday. The second pilot, whose parachute drifted into power lines, remains hospitalized at Parkland Memorial Hospital in Dallas. 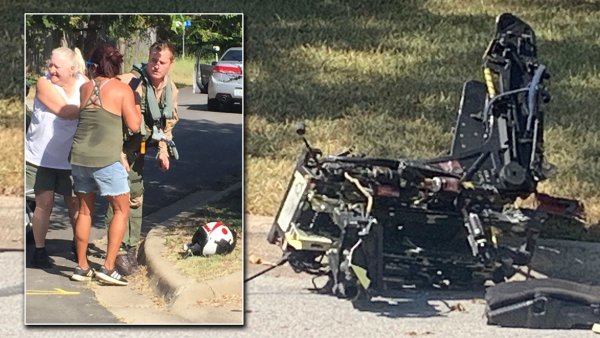 What's left of the jet was wrapped in a tarp and a crane loaded it onto a truck Tuesday.

The investigation into what caused the jet to go down is ongoing.

The crew was assigned to Training Air Wing 2 at Naval Air Station Kingsville, about 420 miles south of Lake Worth, the chief of naval air training said in the post.

The post says they were conducting a routine training flight that originated from the Corpus Christi International Airport, about 350 miles south of Lake Worth along the Gulf Coast.