"We didn't know he was already dead, and we hear helicopters searching," one parishioner said

Sunday services were just wrapping up at the Elm Creek Baptist Church in La Vernia, Texas, when parishioners' phones began buzzing with news of a horrific shooting at another church 11 miles away.

Pastor Don Howard said the first text warned congregants not to drive down Farm-to-Market Road 539 in the direction of Sutherland Springs. Then there were more texts reporting there was a shooting and many casualties during a church service in Sutherland Springs, a short drive away.

"This is beyond understanding. There are no real words to explain what happened," Howard said.

From inside the church, the congregation didn't hear any shots or a crash, but they heard helicopters and looked outside to see police surrounding a vehicle. A couple of parishioners walked outside, but were told to step back by law enforcement.

They would later learn that Devin Patrick Kelley was dead in the vehicle, possibly by a self-inflicted gunshot.

"We didn't know he was already dead, and we hear helicopters searching," said Veronica Howard.

The parishioners, who had been sitting down to a lasagna lunch in the fellowship hall, stopped to pray.

About 20 people in the church were told by law enforcement to go out the back way. The church then stayed open late into the night, offering coffee to investigators who were processing the crime scene.

By Tuesday, the only sign of the gunman's presence was a patch of rough dirt and tire marks in the field where he crashed.

Pastor Howard said his church is prepared to offer whatever support the Sutherland Springs congregation needs. The church building is badly damaged after the shooting and he said his church's doors are open.

Asked whether security precautions will change, Pastor Howard said something might have to. The church, like First Baptist of Sutherland Springs, is tiny, with a tight-knight church family that had always felt safe.

"What compelled him to do what he did? Because he's hurt so many people," the pastor said. "It's a ripple effect that's going to go so far out." 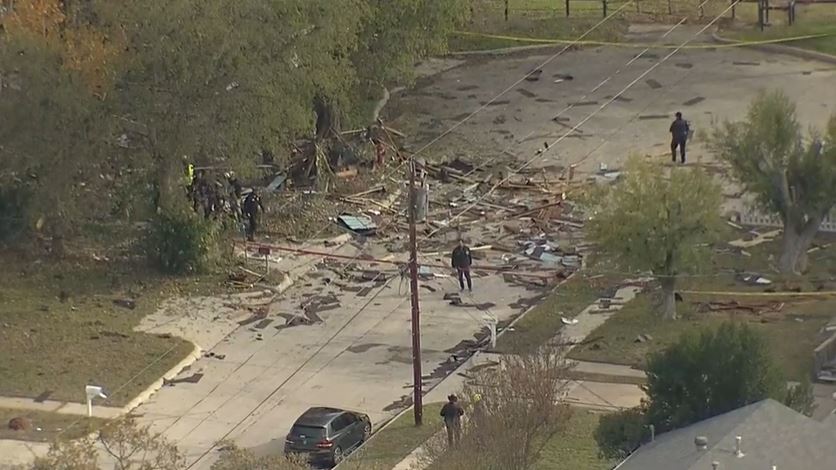 The Elm Creek Baptist Church is planning a prayer vigil on Wednesday at 6 p.m. Pastor Howard said words seem inadequate in light of the community's suffering, but he added he hopes he can offer some comfort and let the families affected know they are loved.

"We do love them and they are loved by God. That's the most important thing," he said.