Colleyville Heritage High School Principal James Whitfield says he's fighting back against critics and asks the district to support him.

A high school principal in Colleyville says his bosses ordered him to remove a photo of him embracing his wife from social media.

Colleyville Heritage High School Principal James Whitfield has faced sharp criticism from some parents who are accusing him of teaching critical race theory.

One of those parents complained about the photo and the district ordered Whitfield to take it down. He said the district wouldn't tell him why.

It was supposed to be a celebration for Whitfield, who had just been named principal of Colleyville Heritage Middle School two years ago, and his family. But before he could pop open the champagne his boss called and asked him to check his email.

Carter in the classroom Sep 24 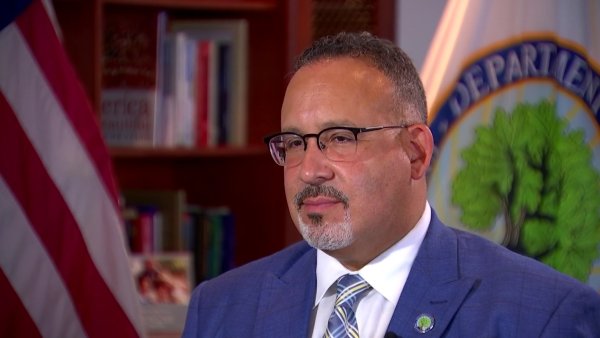 Carter in the classroom Sep 24

He looked online and immediately saw a photo of him and his wife on the beach -- a photo shot by a professional photographer on their anniversary.

"I look at the picture, and I look at the words above it, and it says, 'Is this the Dr. Whitfield we want leading our schools?' I showed it to my wife, who immediately begins to well up with tears," he said.

Whitfield's wife Kerrie said she took the photo to mean a black man with a tattoo on his arm was inappropriate. But James Whitfield said he took it to mean the issue was he was in an interracial relationship.

Whitfield, who was named principal of Colleyville Heritage High School ahead of the 2020-21 school year, has been accused online and in board meetings of teaching critical race theory and promoting a belief that white people are inherently racist.

It's something he and the district have denied. Stressed over the accusations, Whitfield said he couldn't shake the photo incident of 2019 from his head and the district's conclusion the photo was inappropriate.

"They said, 'Could you take it down? Can you take this picture down? Can you hide it?' and I asked, 'Why? What's wrong with the picture?' It was, 'Hey, I am trying to avoid any conflict."

"When a social media concern is brought to the attention of the district, we have a responsibility to review it. Some of the photos the district received contained poses that are questionable for an educator, especially a principal or administrator. It had absolutely nothing to do with race. As a new campus principal, we wanted to provide a smooth transition for Dr. Whitfield to Heritage Middle School, which is why we advised him of the concern and made a request for the photos to be taken down from Facebook."

Some parents from Colleyville Heritage learned of the photo incident after a lengthy social media post Whitfield made over the weekend about the accusations he's faced and the pressure he and his family have been under, including the frustration over the district asking him to take down the photo.

"I think it's sweet. He's a happily married man. It's he and his beautiful wife, they have a beautiful family," said Sunni Roppollo, who has children at Colleyville Heritage High.

Whether the district acted over concerns from parents over racial issues or the way the couple was posed, Roppollo said there was no reason to censor the principal.

"I chalk it up to educators are held to a different standard, unfortunately. I think it's silly, I can't see why a husband and wife can't have a picture of them in a sweet moment."

A petition in support of Whitfield has hundreds of signatures, and he said he's humbled for the support he's received and regrets he held this in for so long.

"I wish I had the conviction to say, 'No, I'm not going to take it down; that's a picture of me and my wife kissing on the beach; there's no reason for me to take this photo down.'"