A plane crash at Addison Airport that killed 10 people in June 2019 was caused by pilot error, the National Transportation Safety Board said in their final report on the crash published Tuesday.

The NTSB said the pilot of a King Air 350 failed to control the prop airplane after losing thrust in one of two engines just seconds after takeoff. Video of the crash showed the aircraft rising into the air before banking sharply to the left and crashing into a hanger where it burst into flames.

The crash killed both pilots and all eight passengers.

The NTSB said crash investigators used the airplane's flight data and performance characteristics along with video from multiple cameras that recorded the plane's departure and crash to recreate the flight path and determine the airplane's position, speed, altitude and roll angles. 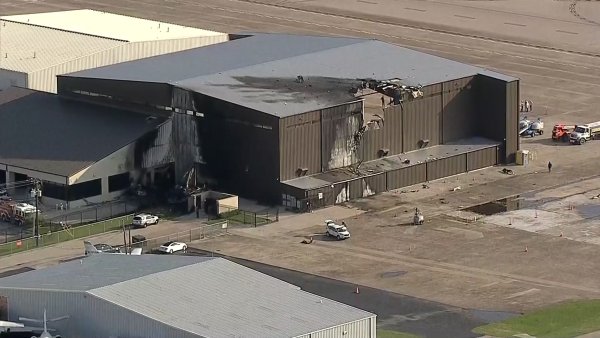 ‘What in the World?' NTSB Details What Pilots Said Before Deadly Addison Plane Crash

The agency said that "after the left engine lost almost all thrust several seconds after takeoff, the pilot responded to the emergency with left rudder input, the opposite action of what the emergency called for."

By the time the pilot applied right rudder seconds later, the NTSB said, "the airplane was rolling inverted, and there was insufficient altitude for recovery."

NTSB investigators said that had the pilot initially applied the right rudder, the airplane would have been controllable.

The NTSB also said the cockpit voice recorder did not record the pilots doing any pre-flight checklists nor did they discuss how they would handle any emergency procedure, including the loss of an engine or thurst on takeoff. The NTSB said the pilot's failure to follow checklists and adhere to the airplane manufacturer's emergency procedures contributed to the accident.

In audio released from the voice recorder in September 2020, the pilot can be heard asking, “What in the world?” and his co-pilot responds, “You just lost your left engine.”

Seconds later the plane that was bound for St. Petersburg, Florida, crashed into the hanger.

Investigators performed a detailed examination of the left engine and its control systems and, according to the NTSB, found no condition that would have prevented normal operation. They added there was a known risk of an unintentional movement of an engine power lever if its friction lock was adjusted incorrectly and that friction lock settings are one of the items in a pre-takeoff checklist the pilot failed to use.

The NTSB said investigators were unable to determine if the friction lock settings played a role in the loss of thrust on the left engine.

The cause for loss of engine thrust could not be determined, the NTSB said.

The pilot, Howard Cassady, 71, and co-pilot, Matthew Palmer, 28, and all eight passengers were killed.

The passengers included a family of four and two couples. Brian Ellard, 52, and his wife, Ornella Ellard, 45, were killed, along with her two children, 15-year-old Alice Maritato and 13-year-old Dylan Maritato. Also killed were: Stephen Thelan, 58, and Gina Thelen, 57; and John Titus, 61, and Mary Titus, 60.