In late May, the Texas Secretary of State’s Office released guidance on recommended health protocols for Texas election officials and voters. Many of those guidelines have been adopted by counties across North Texas.

This election was set for May but Gov. Greg Abbott delayed it because of the novel coronavirus pandemic.

Polling Location: Not sure where to vote? You can find your polling place here.
Election Results: See a listing of runoff races for Tuesday, July 14 here. After 7 p.m., return to see the race results.

Since then, counties across the state have been preparing and working on how they can keep you safe at the polling centers. Election officials have said the July primary runoff could be a dry run for how safety protocols are used in the November election.

"Despite COVID-19, the drumbeat of our democracy has marched on," Secretary Hughs said in a prepared statement. "I strongly encourage all eligible Texans to set aside time now so they can be prepared to cast a ballot during the early voting period or on Election Day. It is essential to our democracy that Texans are able to safely and confidently cast their vote."

NBC 5’s Alanna Quillen reports how Texas election officials are treating the July primary runoff as a dry run for how safety protocols are used in the November election.

Early voting ended Friday, July 10 and did not occur on July 3 or 4 in observance of Independence Day.

Approximately 64,000 voters have already experienced the new voting protocols during the extended early voting period prior to Tuesday, according to Elections Administrator Toni Pippins-Poole.

Elections officials in Dallas County are asking voters to perform a self-assessment before going to a polling location for any new or worsening signs or symptoms of possible COVID-19. If they are sick, they are encouraged to use curbside voting.

Click here to learn more about curbside voting and what the eligibility requirements are.

Before arriving, voters are asked to consider bringing their own marking instruments such as a pen, pencil with eraser, or stylus to use when checking-in to vote and for marking their ballot.

Masks are also encouraged but voters should be prepared to lower their masks if the election judge requests identity verification.

Officials are also creating a Safety Vote Sanitation Station where you can sanitize before and after voting. Hands-free gel dispenser, sanitizer, disinfectant wipes, paper towels and a trashcan are provided at the station.

Once you walk in, you’ll be directed to the check-in table featuring a protective shield between you and the election staff. Social distancing will be enforced.

If you don’t bring your own stylus, you’ll be assigned one and you must return it to staff. That stylus will be sanitized before reuse.

Election staff will also handle sanitizing polling surfaces and shields throughout the day.

One potential cause for concern on Election Day, according to Pippins-Poole, will be if any poll workers determine they are experiencing coronavirus symptoms, or may have been exposed to the virus.

On Monday, 25 poll workers informed the county that they feared they were at risk, would quarantine as a result, which forced the county to quickly find backup elections officials, Pippins-Poole said.

If another group of poll workers has to bow out on Tuesday, some polling places may be unable to open up.

"That's our fear right now, is being able to alert our voters that the polling location that you think is going to be in your neighborhood, or easily accessible to you, is not going to be open," Pippins-Poole said. "So, that's a critical issue that we're facing right now."

As of Monday night, 271 of the usual 465 polling places will be open on Tuesday, which means nearly half of the polling places are closed for various reasons.

For more information on what you need to prepare for at Dallas County polling sites, click here.

You can also click though this interactive map to find your nearest polling location and what the hours are.

Heider Garcia, Elections Administrator for Tarrant County, said they have a goal for the voter to have as little contact with the equipment as possible.

Voters will be asked to wear masks when they vote either on July 14 or if they choose to vote early, according to Heider. Depending on the polling location, their hands will be sanitized via either spray or gel before handing over the appropriate ID.

Poll workers will also have devices by their tables, which include a sponge covered with a sanitizing solution. The devices will be used to clean the stylus pens used by voters.

Garcia said when they initially considered how voting machines could be placed six feet apart, they realized it would have reduced machines by 40-60% in some sites.

“What that translates immediately is a longer line,” Garcia said, explaining why they are opting for the ‘contactless’ option instead. “Considering this is an election in the middle of the summer, we don’t want people waiting outside. The longer they are, probably the higher the risk.”

Garcia said the public also plays a role in ensuring the process goes as smoothly as possible. His advice in preparation includes grabbing a sample ballot and studying candidates ahead of time.

Much of Collin County’s protocols fall in line with the state guidelines.

If turnout is any indication, it would seem that voters in Collin County feel comfortable with the process. More than 27,000 people turned out to vote early during the early voting period, according to Sherbet.

Having trouble viewing the document below? Click here to open it in a new window.

Denton County has also created its own set of safety guidelines that follow with CDC and state recommendations.

Sanitized pens will be offered to each voter if they don't bring one with them. After the voter is finished using the sanitized pen, you’ll have to deposit the pen in a collection bucket for pens near the exit of the polling place.

All polling places are also equipped with a Safety Vote, the all-in-one sanitization station recommended by the state.

Additionally, sanitation supplies are provided to poll workers and they are instructed to routinely clean frequently touched surfaces including, but not limited to voting booths, doors, and styluses.

Click here for more information on voting in Denton County.

Voting by mail is another option for voters.

In order to be eligible for a mail ballot, the voter must fall into one of four eligibility categories:

You can find instructions for completing an application for ballot by mail by clicking here. 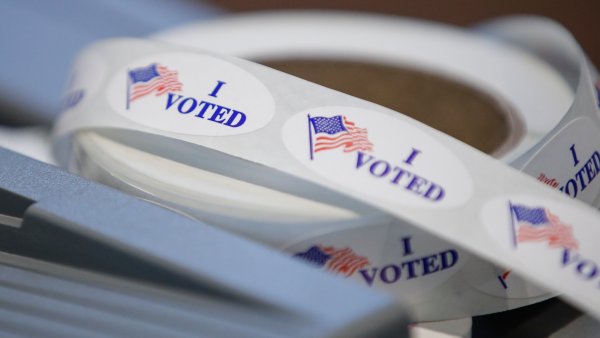