Matthew Law's wife said her husband will always be remembered for his generosity, infectious laugh and love for his country

"No words can begin to describe the agony and the pain and just the trauma of it all," said his wife Jennifer Law. "To experience heartache like that truly hurts like physically. I can't imagine anybody having to go through this, I would never want that for anyone."

She said it all started when her husband became ill on Halloween.

"He woke up and started running a fever, and said, 'I just don’t feel right.' He was tired and I said, 'You need to go get tested,' and he said, ‘No, it’s probably just a cold.’ So the only place that could fit us in was CVS in Denton which was a solid 45 minutes to an hour away, and he tested positive," explained Law. 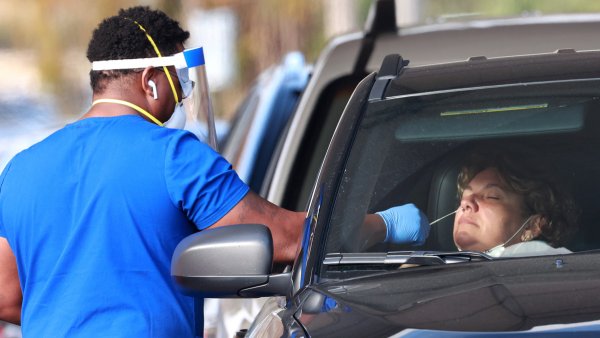 The entire family, including their five kids, quarantined.

They tried a variety of home remedies such as vitamin C, zinc and other supplements, but nothing helped.

“His fever would get high and he would feel really miserable and the body aches were terrible. He said it felt like he broke every bone in his body at once, it was just so excruciating," said Law.

On Nov. 9th, Matthew woke up pale and unable to breathe, according to Law.

"His O2 status was at 67 and so we rushed him to the doctor and the doctor said, 'Go straight to the hospital,'" she explained.

While there, his wife said he experienced the same ups and downs when it came to his health and was quickly moved to the Intensive Care Unit at Methodist Mansfield.

She said the team of health care workers was great and did their best, but ultimately the virus was too much. Less than 24 hours after being intubated, Matthew died.

"This shouldn’t have happened to him, but it can happen to anybody. Literally anybody," Jennifer Law said.

What pains her the most, is the fact her kids couldn't say goodbye to their father.

“They’ll never get to see Dad again. He’s not going to be there for all of their life achievements, their graduations, weddings and everything like that," she said. "It's so unfair and it’s so wrong and I want to be able to fix that for them, but I can't do that."

Their five kids include four boys, ages 11, 9, 8 and 3, along with a 1-year-old girl. Law said they give her the motivation to get out of bed every day.

“I wake up in the morning. I get in the shower. I cry my eyes out. I scream. I get angry. I get out, I get dressed. I pull myself together and say, 'You’ve got five kids. Ready, go!'" shared Law. “Somebody gave me some good advice. Minute-by-minute, hour-by-hour, you get through it, you’ll never get over it, you’ll get through it. So we’re just getting through it.”

The mother of five said she hopes their family's story serves as a reminder to others that the virus is real and affects everyone differently.

"I had it and I was fine. I can't stress enough that there's an absolute possibility that you’re not going to be fine," she said. "If you’re not taking proper protocols for social distancing and limiting exposure to the public and wearing your mask, washing your hands; if you're not doing that, I would fear for your life. We did all of that, we still ended up in this situation."

Matthew Law not only loved his family and friends, but he also loved his country and served in the Army for a decade.

"He loved being in the Army, it was some of the best-worst times of his life," said Law. "He was in the Army for 10 years, joined when he was 17, went to Basic Training and came back and finished his senior year in high school and deployed for the first time in 2005 and then in 2009 to Iraq both of the times."

The high school sweethearts were married for 12 years.

“Matt was always ready to help. He had an infectious laugh that was so big," said Law, as she reminisced about her husband.

"Through it all, he was still trying to help people from his bed. A friend's oven went out and he was like, ‘We’re about to get a new oven, why don’t we give them ours, we don’t need it, it’s fine.' And that’s just a true testament to who he was," said Law.

She said they were also very active in their Christian faith and Matthew played the drums in the worship band at church.

She said it's their faith and the community which is helping them get to the next day.

"Our third child is eight and he understands dad is gone. He came to me the other day and asked if we can FaceTime Daddy and I said, 'No honey, heaven doesn’t work like that. They don’t have that setup,'" said Law.

Matthew will be laid to rest later this week and there will be a virtual service, click here for more information.