NBC 5 Investigates has uncovered new evidence showing top officials at the Texas Department of Motor Vehicles were warned two years ago about a major security flaw in the system that issues temporary license plates, but the DMV did not fully close that loophole until last month, days after we questioned why.

The security gap in the temporary license plate issuing system allowed crooks to create paper plates for cars that shouldn't be on the road. 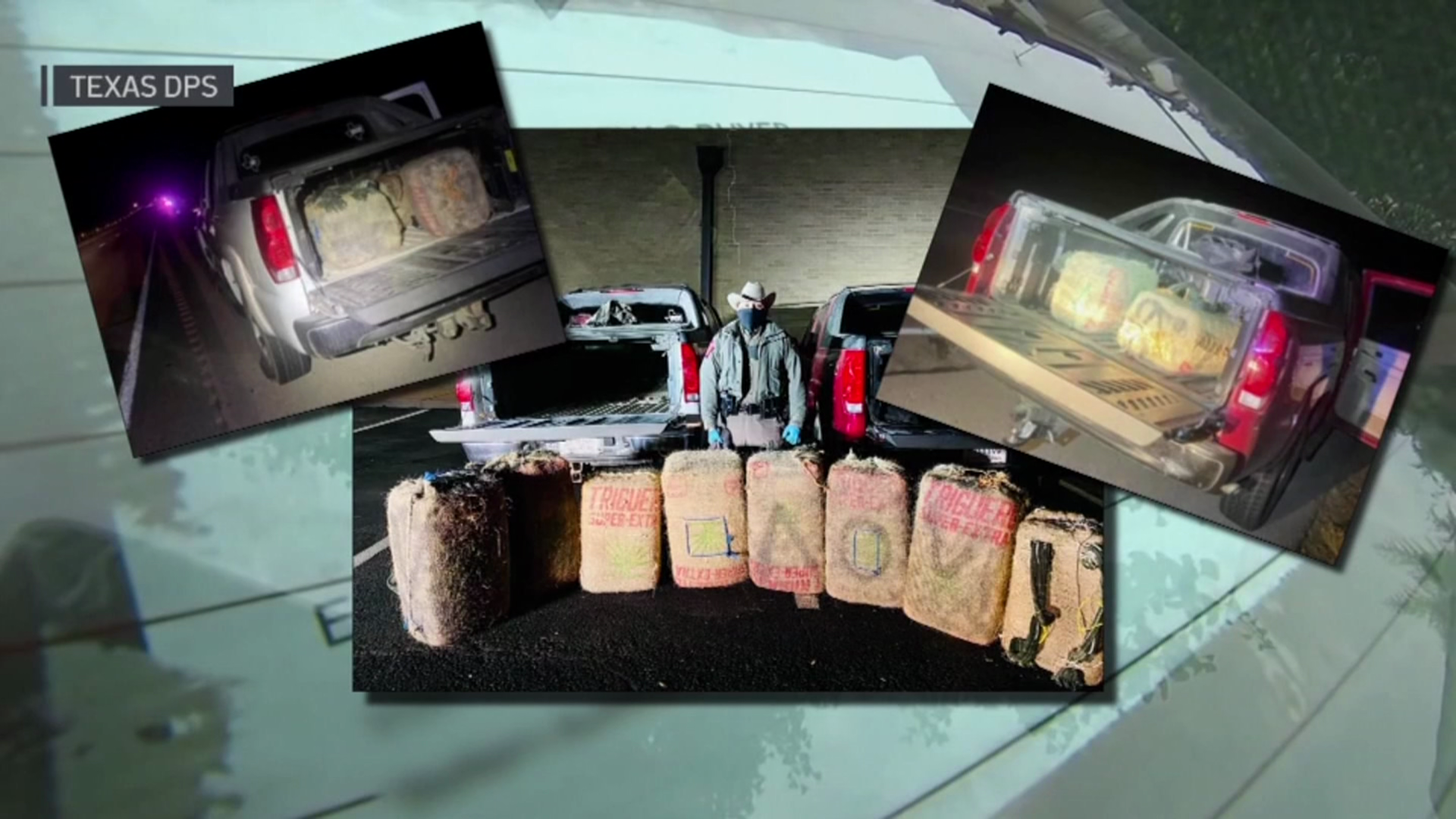 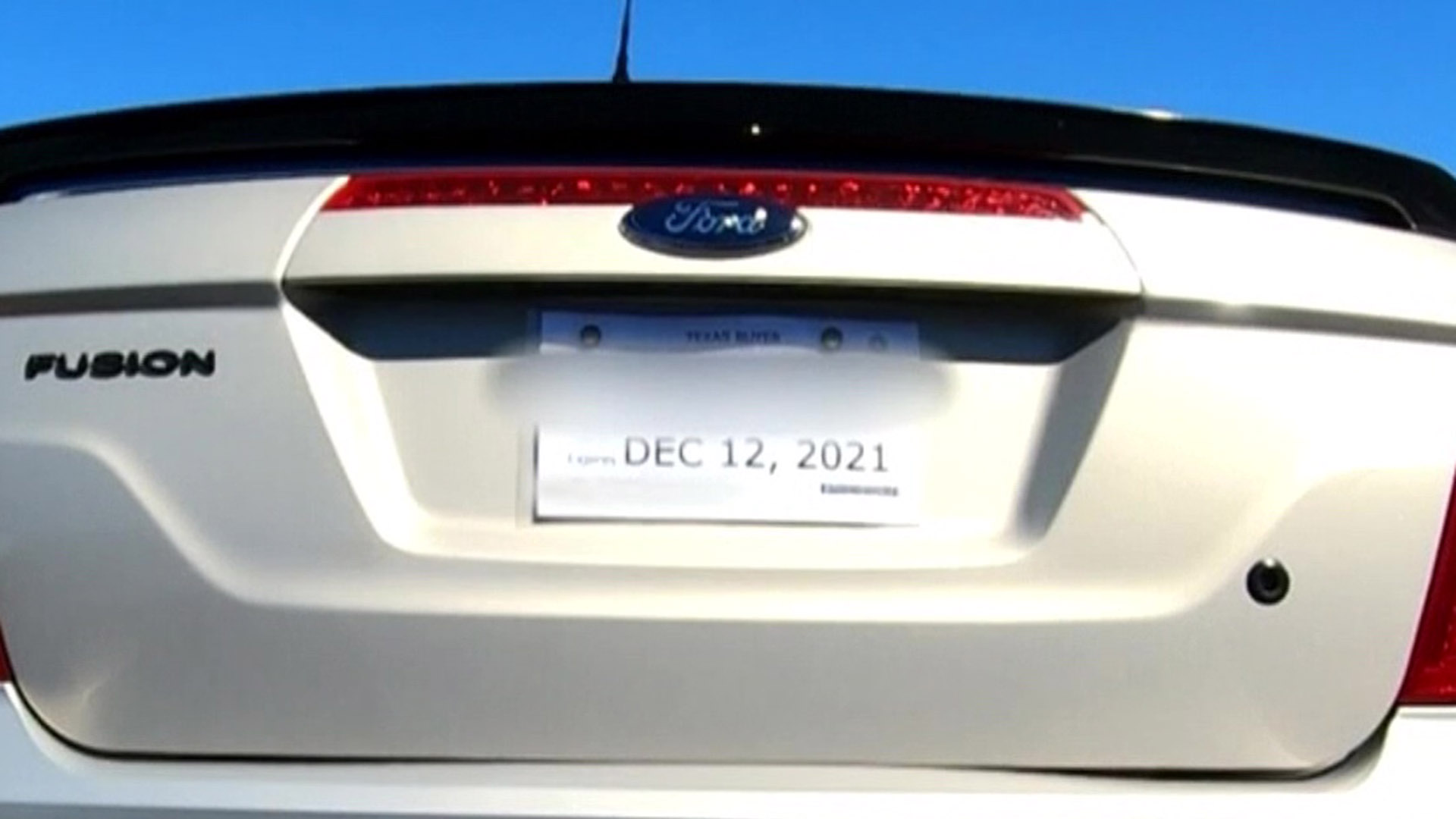 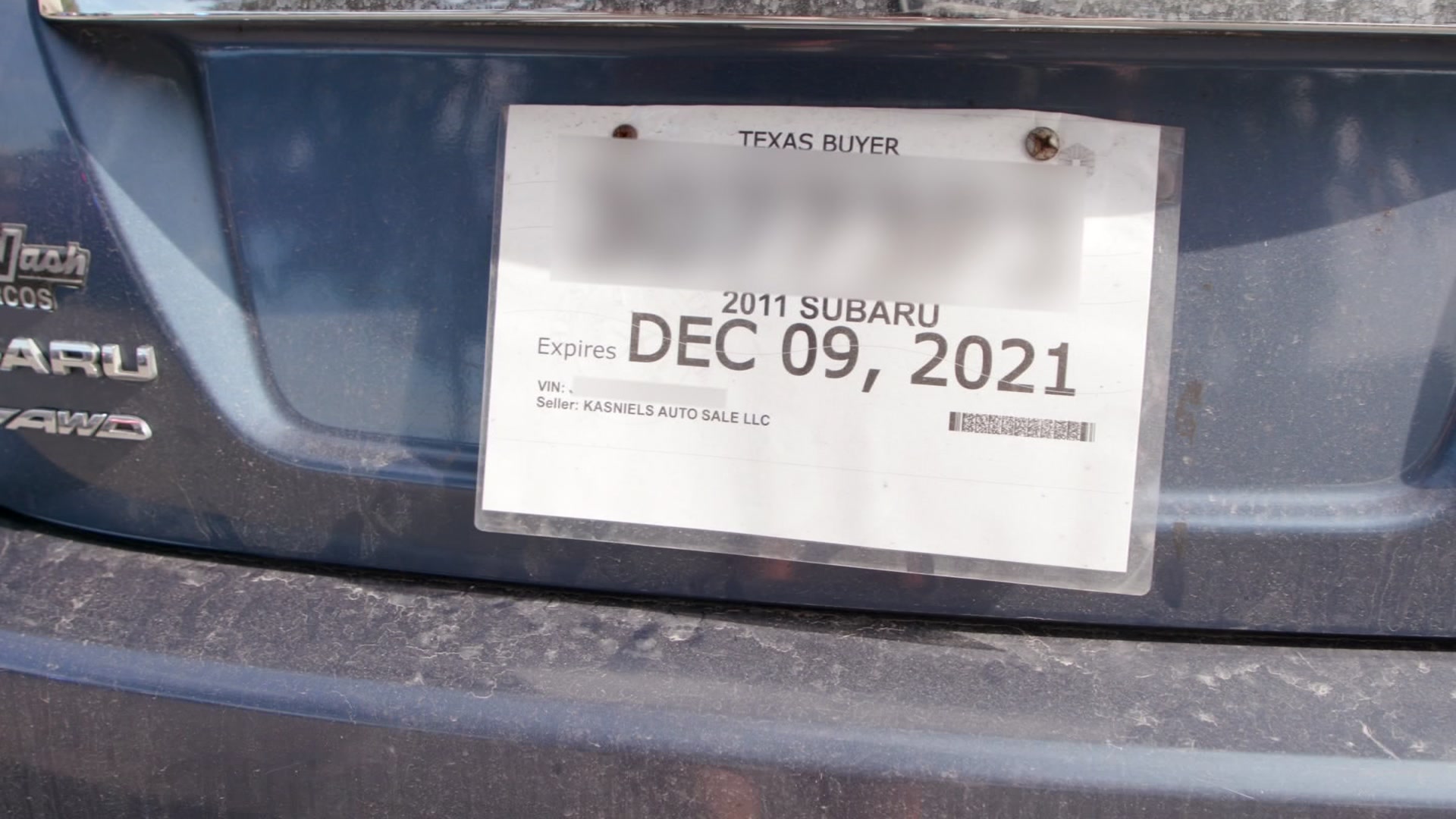 A Travis County constables unit that leads state efforts to combat the fraud now says a third of all Texas temporary tags issued last year, more than 1.2 million, were created by dealers they have investigated for fraud, and that crooked dealers made more than $64 million selling tags last year alone.

“We have a system defect,” Brewster said at the time.

So fake, even a novice could spot them.

Police told NBC 5 Investigates that particular dealer is one of many that printed tags and illegally sold them for a profit in a massive black market.

When NBC 5 Investigates confronted Brewster about the security flaw last month she said her agency would move fast to fix the system.

“It does not stop special characters. That is that defect that is being worked on now and the solution to that defect will be implemented as soon as possible,” said Brewster.

In a new statement to NBC 5 Investigates four days after that interview with Brewster, the DMV said the department "…implemented a technology update on Dec. 6, 2021…"

The agency said the security problem was, "…identified in late November."

But four Texas law enforcement officials who spoke to NBC 5 Investigates said they warned the DMV about that security loophole two years ago.

“We flat out told them in 2019,” said David Kohler, a sheriff’s deputy from central Texas.

Kohler is one of the officers who met with top DMV staffers in December 2019.

NBC 5 Investigates obtained a recording of the 2019 meeting from Sgt. Jose Escribano, an investigator with the Travis County Constable's Office who also took part in the meeting.

In the recording, several officers, including Kohler and Escribano, question why the DMV system does not stop people from using fake VIN numbers to get tags.

“The system will allow you to generate a buyer's tag with that incorrect VIN,” Kohler says in the recording.

A police detective warned the DMV he was seeing tags issued to bogus VINs with periods in them.

“Certainly, they shouldn't be able to put a punctuation mark in there after the VIN for a motor vehicle,” said Capt. Ed Martin, with the Vidor Police Department.

DMV HAS THE ABILITY TO PREVENT FAKE VINS

According to the audio, several top DMV officials attended the meeting. Including Jeremiah Kuntz, who at the time was the director of the department's vehicle title and registration division. In the recording, Kuntz said the DMV has the ability to prevent fake VIN’s from being entered into the system.

“We could lock that out,” said Kuntz.

“Generally, when I crank those down, I start getting pushback on the other side of things because I've got a business industry that is highly vocal that sitting on the other side,” said Kuntz.

In the audio, Kuntz said some trailers and unique vehicles may have unusual VIN’s containing more, or less, numbers and letters and the DMV doesn't want to make it too hard for dealers to print tags.

But police push back, arguing no one should be able to enter periods or 18-character VINs for cars that normally have 17-characters.

“There's got to be a way to lock it down to where you can't put more than 17 in it for a motor vehicle and keep the punctuation marks out of it,” said Martin.

Kuntz told the officers that the DMV would need more money from the legislature to re-program the system.

Kuntz has since left the DMV.

We reached him by phone and played some of the meeting audio for him. He said he remembered the meeting but declined to comment on it and would not say whether he informed his boss, Executive Director Brewster, of the problem in 2019.

NBC 5 asked to interview Brewster again. but DMV staff would not allow us to speak with her. 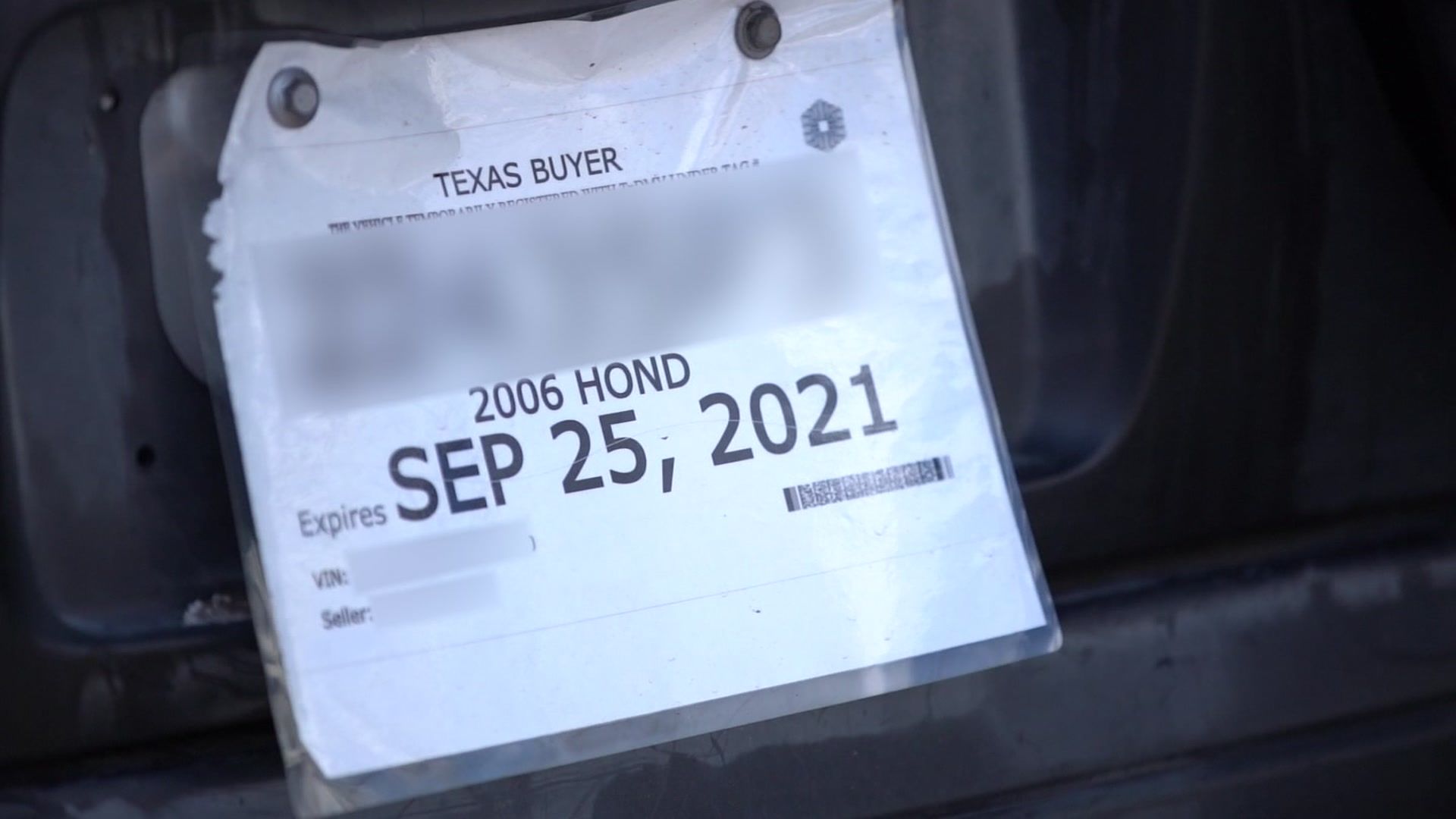 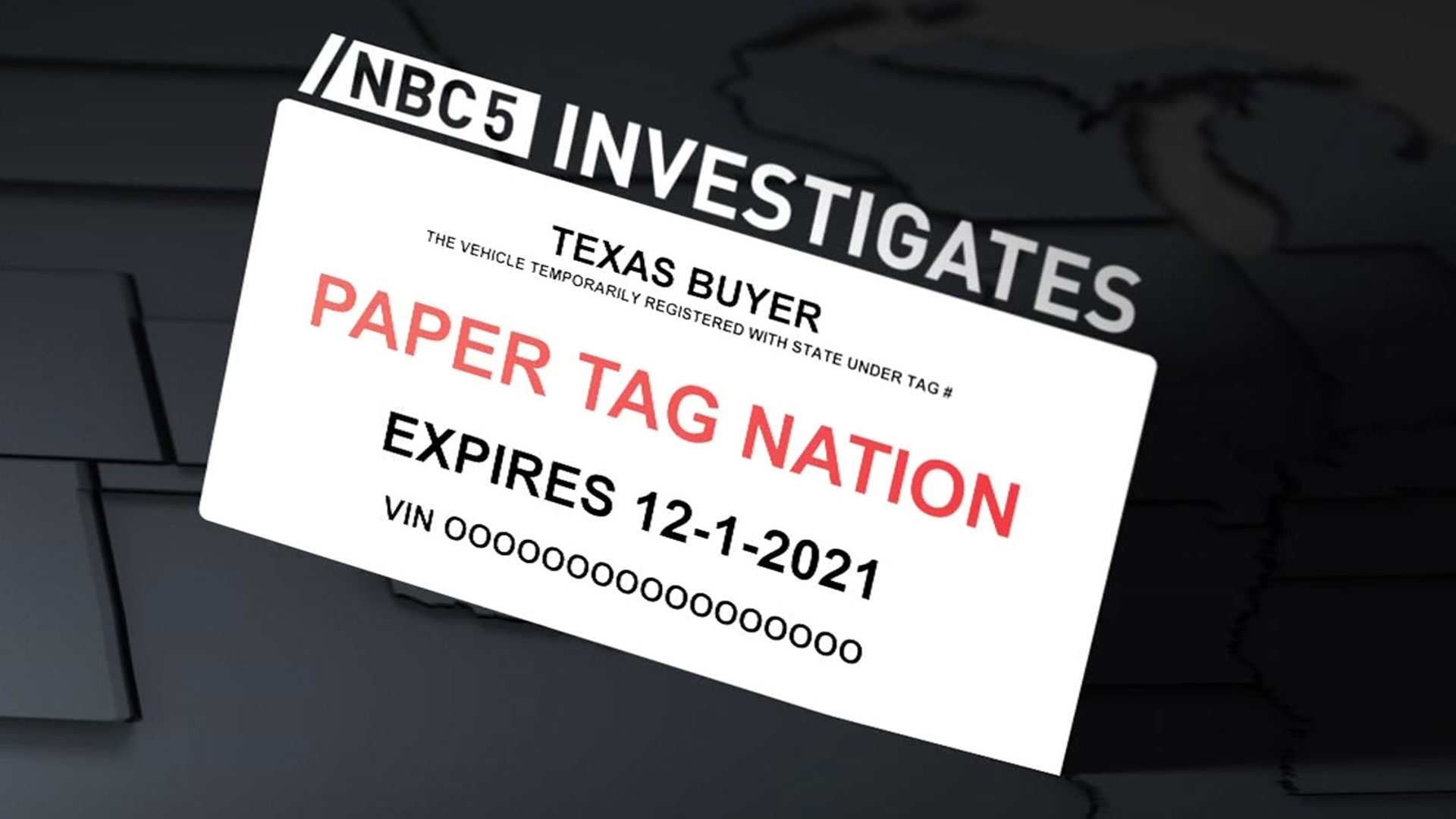 A spokesman told us the DMV "…routinely collaborates with our law enforcement partners…" and said, "During the past several years, TxDMV has implemented many system enhancements."

That was fixed in December, closing the loophole that frustrated officers who raised concerns years ago.

Police told NBC 5 Investigates those periods and exclamation points were often added to VIN numbers by people trying to disguise salvaged or damaged vehicles that cannot be registered legally because they are unsafe.

Officers at the state's top paper tag fraud unit said security gaps at the DMV have flooded Texas roads with so-called "ghost cars," or cars with paper tags sold by unscrupulous dealers who can enter bogus information into the state system making it hard for police to identify the real owner of a car.

“You've just handed them an instrument for them to do fraud. The State of Texas, the Texas Department of Motor Vehicle. Their system is ready and ripe for fraud,” said Escribano.

In December, the DMV’s top boss agreed tag fraud has become a crisis.

“This is absolutely an emergency. We're looking at every possible solution we can,” said Brewster.

The question now is could more have been done to prevent that emergency years ago?

VIN NUMBERS AREN'T THE ONLY FLAW

The problems with the DMV’s tag system go way beyond this one security flaw.

Dealers are only supposed to issue paper tags to vehicles they actually sold, and are not allowed to sell tags.

After NBC 5 Investigates aired a series of reports about the scale of the problem last fall, a DMV advisory committee recommended fingerprinting car dealer license applicants.

The DMV board will consider that recommendation later this month. The board is also considering new limits on the number of tags a dealer can issue in a calendar year.