Dealers, DMV wants Facebook to do more to stop the proliferation of ads for fake license tags

The Texas Department of Motor Vehicles says its staff is working with Facebook to block people from using the social media platform to sell fraudulent Texas temporary license plates.

But despite those ongoing efforts, NBC 5 Investigates found new ads continue to pop up, frustrating law enforcement officials trying to stop the illegal sale of fraudulent tags, which are sometimes used to facilitate other crimes.

NBC 5 viewers continue to flag the ads and send them to our NBC 5 Investigates team, some asking us how the tags can be marketed out in the open when police say it is illegal to sell them? Temporary tags are only supposed to be issued by car dealers at the time of a vehicle sale, and tags should never be sold.

Our investigation found some of the tags currently offered for sale on Facebook are counterfeits that were never issued out of the TxDMV’s tag system.  But the counterfeits contain the names of real car dealers and sometimes even real plate numbers that were issued in the past by other dealers.

Police said it’s a sign that crooks are adapting their tactics after the TxDMV has taken steps to block licensed car dealers suspected of selling tags, by suspending their access to the state’s online tag system.

WHO IS BEHIND THE ADS?

NBC 5 Investigates messaged some of the people who posted ads for paper tags on Facebook to see if the tags being offered for sale were issued by licensed dealers or whether the tags were forged.

Our team did not offer to purchase any tags but instead asked lots of questions, like how much the sellers charge, what information they would need before selling a tag and whether the tags they are offering for sale are legitimate?

Some sellers responded to our messages right away, indicating that they could provide tags in just minutes and take payment via various cash apps.

One seller, with a profile that said he's from Arlington, messaged back and said he charged $40. When we asked if the tags were legit he responded by sending a photo. The picture showed the tag was issued by a car dealer called MIR Motors.

We know that tag is fraudulent because the TxDMV blocked MIR Motors from issuing tags months ago after law enforcement identified MIR as a dealer suspected of selling tags for profit.

Police told NBC 5 Investigates the crooks are now selling counterfeit tags with the names of MIR and other dealers police and the DMV have already busted.

FORT WORTH DEALER CAUGHT IN THE MESS

Other Facebook ads we saw showed images of tags purportedly issued by small car dealers that are still in business, including Powerplay Motors, a dealer located in Fort Worth.

Powerplay's owner, Domynyque Lopez, told NBC 5 Investigates that police officers have been calling her from across the country investigating cars with bogus Powerplay Motors tags, but the tags were not issued by her dealership.

“When they pull it up in the system, they're like, 'Well, that car says it's a Nissan Altima, but the tag is saying it's for a Toyota Camry - that's not lining up,'" Lopez told NBC 5 Investigates.

DMV records show investigators looked into many of those tags and found Powerplay Motors "did not create the tags, instead crooks put Powerplay's name on counterfeits along with old tag numbers that were issued by other dealers."

Lopez said she doesn't know who is using her dealership's name or why, but she and her attorney wish Facebook would help stop people from selling those tags online.

“I mean, if someone goes on there trying to sell drugs, they know how to monitor that. They know how to take down that post. What's the difference?” Lopez asked.

In a statement, a Facebook spokesperson told NBC 5 Investigates, "We prohibit the sale of fraudulent temporary tags and encourage people to report suspicious listings to us."

The company said it has been, "collaborating with the Texas DMV to understand the scope and scale of the problem."

When asked if the agency is getting good cooperation from Facebook, Bacarisse told NBC 5 Investigates, “We could always use more, but it’s a good start.”

“We finally got a contact there and we've had conversations with them and they are helping. But that's a slow process because it's algorithmically driven, right?” Bacarisse said.

Facebook said some of the ads attempt to get around algorithms Facebook uses to detect suspicious posts. Some use punctuation marks or characters between letters to make it harder for algorithms to spot them, requiring the company to use human eyes to spot some posts instead.

Facebook told NBC 5 Investigates this may be another attempt to circumvent detection but that they are taking steps to remove those listings too. 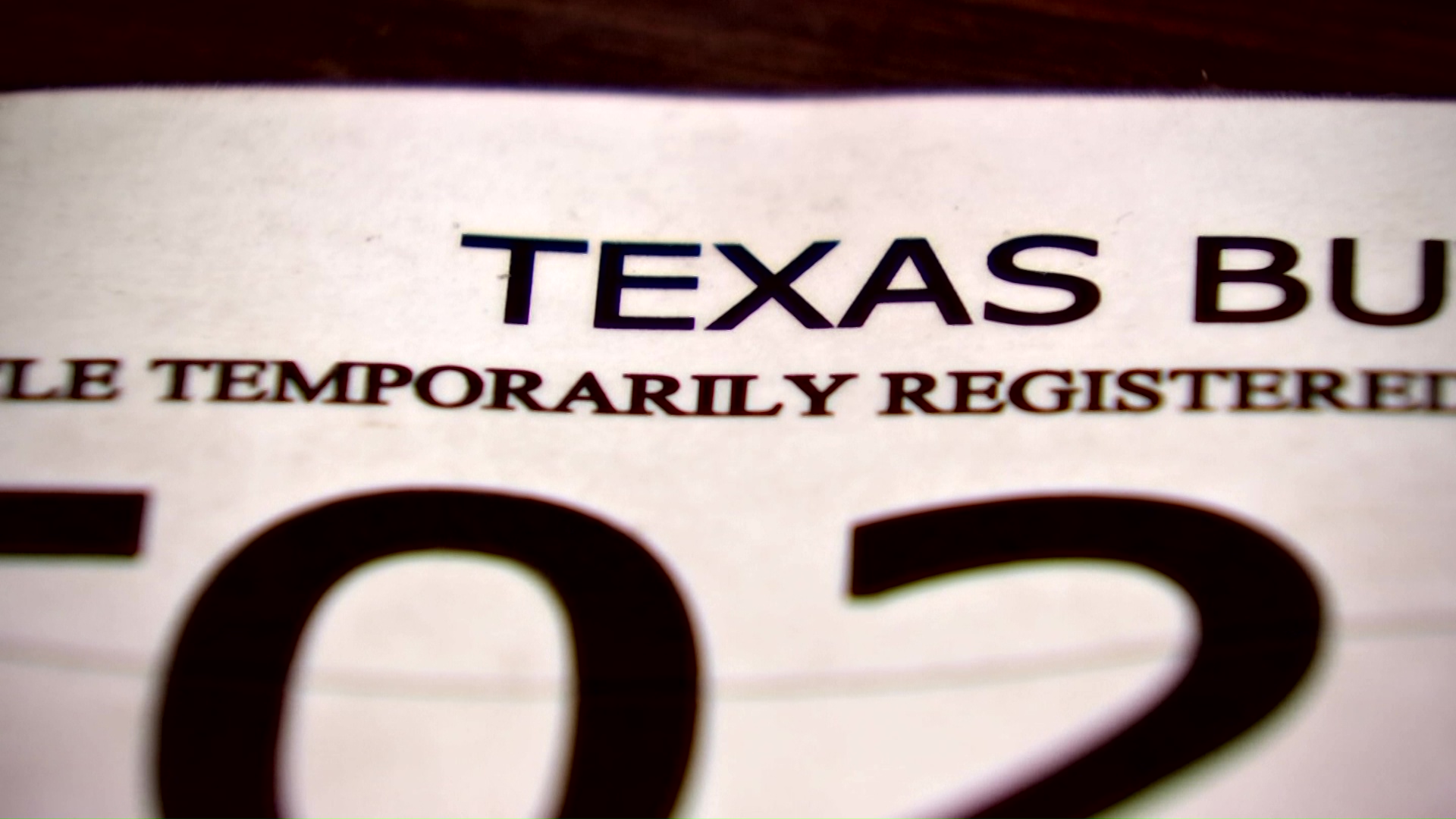 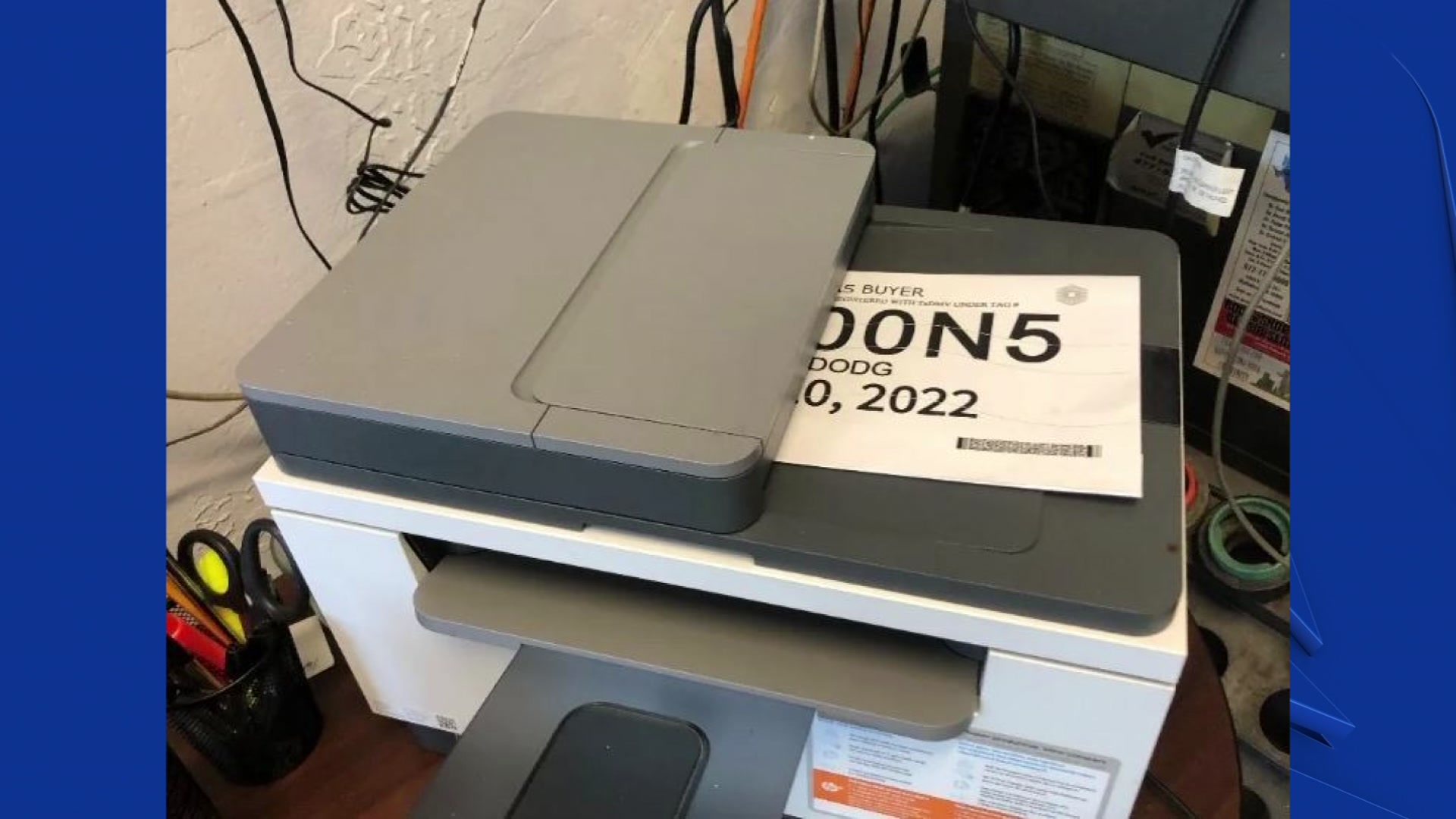 A GAME OF WHACK-A-MOLE

“These criminals are adapting,” said police detective Mike Bradburn, who is with a special Travis County Constables unit that investigates fraudulent tags.

For Bradburn, the ads are a frustrating game of whack-a-mole.

“I can't sit there all day and look at ads and turn them over. We just don't have the manpower for that. I think Facebook should look into it. They prohibit other items. I don't know why they can't stop the tags,” Bradburn said.

Many of the ads NBC 5 saw online have since been pulled down by Facebook but each day there seem to be some new ones.

Facebook said it continues to improve its detection efforts and remove listings that violate its policy -- which prohibits the sale of fake documents. Facebook told NBC 5 Investigates it encourages people to report the ads for counterfeit tags so the company can investigate.

But for dealers like Lopez, caught in the paper tag mess, the ads continue to frustrate.

“How can you really handle a situation when you can't talk to anybody physically? You can't do anything besides pushing a button that says 'Report,'” Lopez said.

Lopez is now fighting to keep her business. The TxDMV has suspended her access to its temporary tag system. If a dealer cannot print temporary tags, they cannot sell cars.

The DMV confirmed it is still investigating Powerplay Motors but said it cannot comment on an ongoing investigation.

Lopez insisted she has not sold any temporary tags and her attorney told NBC 5 Investigates she plans to appeal the DMV’s decision.

Powerplay Motors is one of more than 30 dealers the DMV has suspended this year under a crackdown on fake tags.