"Dallas is…" That is the sentence Verdigris Ensemble has been asking Dallas citizens to complete as they prepare for "Faces of Dallas," the choir's season finale concert at Arts Mission Oak Cliff from April 26 - 28.

Part of the Dallas Symphony Orchestra's SOLUNA International Music and Arts Festival, the concert highlights the diversity of Dallas from the perspective of people who have called Dallas home for generations to families seeking refuge in the Lone Star State.

More than year in the making, the concert is a fusion of music, visual art and poetry reflecting the responses of more than 900 Dallas residents. The choir chose four individuals or groups that reflect different perspectives of Dallas as the concert's "Faces of Dallas." Their stories inspired paintings by Stephen Zhang and are the impetus for original music by David Ross Lawn.

Sam Brukhman, Verdigris Ensemble's artistic director, met one of those faces of Dallas, Donald Payton, at the South Dallas Cultural Center. Payton, a genealogist, is descended from one of the first black families living in Dallas. Payton got a preview of his portrait. "I cried when I saw that portrait of me. That's the first painting I've ever had of me," Payton said. 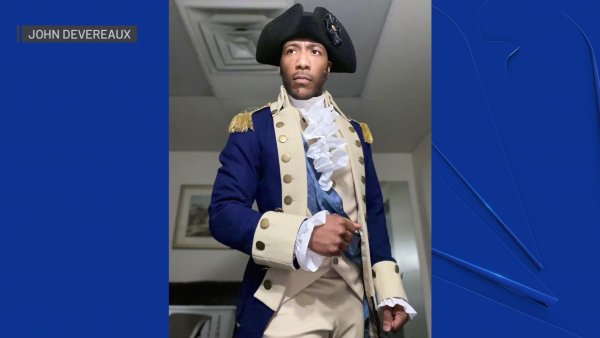 Payton first learned about his family's history as a child listening to his relatives tell family stories. "That's what people talked about. This is before we had television. Television was a luxury. We sat around and talked about things," Payton said.

He heard stories about his great-great-grandfather, John Miller, who bought land near what is now Paul Quinn College after he was freed from slavery and started a farm. He learned about the hard work his family members did, picking cotton and washing clothes.

Meeting Alex Haley, author of "Roots," was a revelation for Payton. Haley explained the value of genealogy and Payton learned how to research and corroborate his family's oral histories. His family's hard work is a source of pride for him. "When I heard those stories, I admired those people," he said.

Payton grew up in Hamilton Park and experienced Dallas as a segregated city. "As far as segregation was concerned, we had our own communities," Payton said, explaining the separate churches, restaurants, stores and theaters. "Restaurants would say, 'We don't serve Negroes.' And we'd say, 'That's good because we don't eat them.' We always used humor. It's called laughing to keep from crying."

He attended North Texas State University, now the University of North Texas. The school had been forced to integrate and Payton and his fellow black classmates endured institutional racism.

"A lot of subtle stuff was going on, but we were there for the education," Payton said. "We came from segregated communities and we knew what was going on and we learned to swim through it."

Payton does not allow racism to define him. "I've never let segregation stop me going from where I want, doing what I want,' he said. "I'm here to learn from you and you learn from me. We're here to exchange ideas."

Determined to feature the stories of Dallas' refugee population, Brukhman connected with Jin-Ya Huang, the founder of Break Bread, Break Borders, a catering business that provides training and creates financial opportunities for refugees interested in the culinary industry.

Huang introduced Brukhman to Sharifeh and Jamilah, Afghan refugee sisters. Speaking through an interpreter, Sharifeh explained by 2006, life in Kabul was too dangerous for the sisters.

"My family is Shia Muslim, but Taliban, just like most Afghanis, are Sunnis," she said. "There is a lot of conflict between the two Islamic sects. Every year around our new year, which is in spring, Taliban would raid Shia homes and take our belongings. If they found beautiful young girls, they would take them away too. The situation got worse year after year; they started burning houses and attacking more frequently. We decided to leave to protect our children."

The sisters left Afghanistan, traveling through Iran to reach Turkey in 2007. They applied for resettlement and waited in Turkey for 9 years, arriving in Dallas in 2016.

"I didn't know much about Dallas. I thought it would be really hot, like a desert, and we would get headaches from the heat," Sharifeh said. "I remember exiting the airport and feeling the hottest air I have ever felt. Though I imagined Dallas would be hot, it still surprised me."

Like many refugees, Sharifeh does not speak English, forcing her to rely on others. She has also been caring for her husband who developed kidney issues 18 months ago. At Break Bread, Break Borders, she finds hope for her new life in Dallas.

"Break Bread, Break Borders gives me work to do. It also gives me money. When my husband got sick, we had no financial support or any savings to treat him. We had to borrow a lot of money to pay for his treatment. We also experienced homelessness in Afghanistan and Turkey, and I don't want that to happen to us again. Break Bread, Break Borders allows me to provide for my family, and that's very important to me," Sharifeh said. "I hope to one day open my own restaurant."